The Stodders House - A Queen Anne Revival In Manitoba

Historical homes exist in a large range of styles; from the beautifully simple to the decadently complicated.  Queen Anne Revival Style is at the latter end of the architectural spectrum.

The Stodders House is thought to be one of the most striking examples of Queen Anne Revival architecture in Manitoba.  This architectural style, present from 1890 to 1910 in Manitoba, fuses an eclectic collection of design elements including steep gabled roofs, bay windows and turrets, and flourishes of decorative trim. Located in Mordon, Manitoba, this house was built in 1894 for David Stodders. He was a local grain merchant, who was sufficiently affluent to have this residence custom built in the latest of architectural fashions. 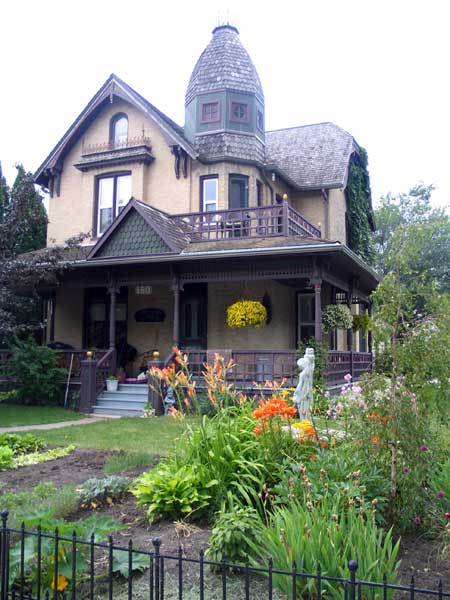 Courtesy of Gordon Goldborough and the Manitoba Historical Society


The entire building is decorated with intricate woodwork, which was unusual for its day in Manitoba. The verandah wraps around two sides of this home, giving the family plenty of room to enjoy the gardens. It features a hexagonal corner tower with a beehive roof which, with the visually dynamic roofline, certainly sets this home beautifully against the prairie skyline.

In 1995 the Stodder House was designated a municipal historical site and meticulously restored to preserve its place in Canadian architectural history.

Queen Anne Revival Style can be seen throughout Canada, and offered some versatility to the specific fashions and tastes of the owners who chose this style.

Researched and Written by Sarah Coates, Masters Student of History, University of Toronto

On Sod Houses and Rammed Earth

It amazes me what you can build a house out of. Imagine it's the mid to late 1800s thru early 1900s and you've left your home in Europe for a…